Recently there has been quite a backlash against high fructose corn syrup (HFCS). I’m here to jump on that. HFCS is basically processed corn sugars put through the industrial chemical ringer to create something similar, but not the same as table sugar. Whether this is a good thing is something that has been debated a lot. On one side there are scientists and doctors doing independent research. They believe HFCS is a bad thing. Sure, sugar isn’t all that great for you either, but they believe HFCS actually changes the way your body reacts to fats and other foods. Another group of scientists and doctors says HFCS is great and normal and not a problem at all. Of course all of this research is funded by the people that make HFCS, funny how that works.
Lately companies have started making their products without HFCS. Snapple has moved away from it and back to real sugar. Pepsi has released Pepsi Throwback, a delicious alternative to their regular soda. In Texas Dublin Dr. Pepper is made with real sugar. The only one of these new drinks that doesn’t taste better is Mountain Dew, and that’s because that odd freakish yellow flavored stuff is so strong you just can’t taste the sugar. I’m really hoping the public goes crazy buying these alternatives. I know I’m doing my part. 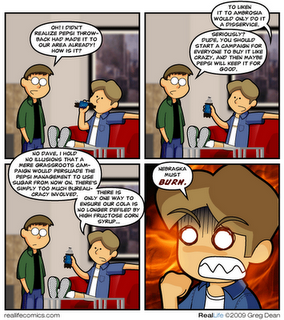 I love how the corn industry tries to label HFCS as “natural”. If it takes processing in a chemical plant it isn’t natural. 7-Up actually changed their labeling from saying all natural after being threatened with a lawsuit about the lie. Because the FDA doesn’t have rules about saying something is “natural” the corn industry is allowed to do it. They’ve even starting doing much mocked advertisements to try to convince the sheepy masses that HFCS okay.
One of my biggest problems with HFCS is the way the government treats it. Because corn is produced in the United States and much of the sugar we use is not there are huge tariffs on imported sugar and huge corn subsidies. That means the government pays farmers to produce a product and penalizes external produces. This goes against a lot of economics. Basically a possibly inferior product is encouraged against market conditions. We’ve given over 40 billion dollars proping up this system since the 90s. These are the same lobbyists and farming groups that have thrust ethanol on us, even though it isn’t that great an idea. Of course that’s another rant.
I guess my general point here is buy Pepsi Throwback, buy sugar products. Write your congressman to tell them to cut out the subsidies. Bring back real sugar, if not for the possible health benefits then for the taste!

With Google+ plugin by Geoff Janes